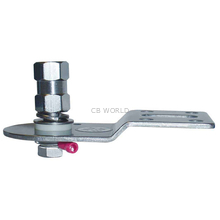 This fender CB antenna mount was designed specifically for Doge pickups 1994-2003. It installs under the hood with no extra holes. The mount uses an existing bolt to install. It is constructed from quality stainless steel. Available with a K4 terminal stud, a K4A SO239 stud, or with no stud and a 3/4" hole for NMO style antennas. The NMO style (SS18N) is most commonly used for amateur or business band antennas.

This is a sturdy mount that can hold up to 5 foot antennas safely. For 4 and 5 foot antennas we recommend attaching the mount with multiple bolts or screws for added support. This mount accepts 3/8 x 24 threaded CB antennas. A CB antenna spring is recommended for this mount.

The version of this mount with a 3/4" hole (SS18N) allows the installation of NMO style antennas. These are more commonly amateur or business band antennas.