As the second-highest grossing film of 1977, Smokey and the Bandit captured the eyes of the nation and beyond. Bandit (Burt Reynolds) is a legendary truck driver who accepts a challenge from a rich Texan to drive 400 cases of illegal Coors beer from Texas to Georgia for $80K in under 28 hours. Bandit requests an advance from the Texan to purchase a Trans-Am, which is to be used to divert attention away from the truck that will be driven by Bandit's close friend. Along the way, Bandit picks up a stray gal (Sally Fields) and a "Smokey" tail - aptly named Justice.

Smokey (Jackie Gleason) chases Bandit out of his own jurisdiction and in and out of many others across several states. All the while, Bandit narrowly evades capture by getting help from his trucker friends by communicating through CB radio. After skidding to the finish line for the race with scant seconds to spare, Bandit is offered another challenge for double or nothing. As game as ever, Bandit guns his car into the sunset on his next challenge, pursued by Justice in his disintegrating patrol car as the credits roll.

Although the movie wasn't highly rated by critics, it was hugely popular. With the CBers' disruptive use of the medium, their imaginative "handles" and colorful language, CB radios grabbed the attention of the general public. CB radios caught fire and had a heyday in the 1970s and although they aren't used nearly as much by the general public today, they are still used as an easy way to communicate on the road.

Both CB enthusiasts and classic car fanatics remain fascinated with the CB radio and antenna Bandit had in his Trans-Am. Discussions in blogs and forums reveal some controversy about exactly what make and model Bandit's CB was in the 1977 movie, and the next section gives a quick look at some possibilities.

Bandit's CB radio in the original Smokey and the Bandit movie

Although pictures from the movie seem inconclusive, some people are convinced that Bandit used a President model because appears to say "President" on the back of his microphone. Others believe the CB was the GM STOCK CBD-10 CB Radio-1977 Pontiac Trans Am/Firebird/Bandit Edition. Evidence that seems to support the stock radio is the build sheet from the original Trans-Am showing that the radio was installed at the factory. The original build radio, the GM CBD-10 CB radio, is displayed and demonstrated in the following video. However, the design of the CBD-10 doesn't seem to match the controls, connections or looks of the radio in the movie clips.

So, if the Trans-Am originally had the factory-installed radio, it likely was changed to a different setup before the movie was shot. Whether that radio was a President, the GM Stock CBD-10 radio or another probably will remain a question in the minds of fans.

If you want to try ID the radio yourself, here is a video clip featuring screenshots from Smokey and the Bandit that briefly shows a close-up glimpse of the CB radio with the police scanner on top. Check out the clip at about 24-30 seconds.

Bandit's radios in the movie sequels

There seems to be more general agreement that Bandit had the Pace 166 CB radio in the sequels of the original Smokey and the Bandit movie. Here is what the Pace 166 looked like.

The Pace 166 is a vintage 1977 AM CB radio with 23 channels, which is all that were allowed by the Federal Communications Commission (FCC) for use in CB radios at that time. It wasn't until shortly after that CBs were permitted to have the current 40 channels. The Pace was a very simple piece of equipment compared to today's technologically advanced CBs. Controls on the front included a microphone connector, switches for automatic noise leveler (ANL), a noise blanker (NB) and the PA/CB switch. Buttons for volume, squelch and channel selector completed the offerings. Watch the following YouTube viceo to hear how it works. For those who are interested in the technical specifications, here are the Pace 166 CB radio's schematics.

Smokey and the Bandit Antenna

Smokey's antenna may well be the Antenna Specialist AS MR 276 which looks like this one from the original movie: 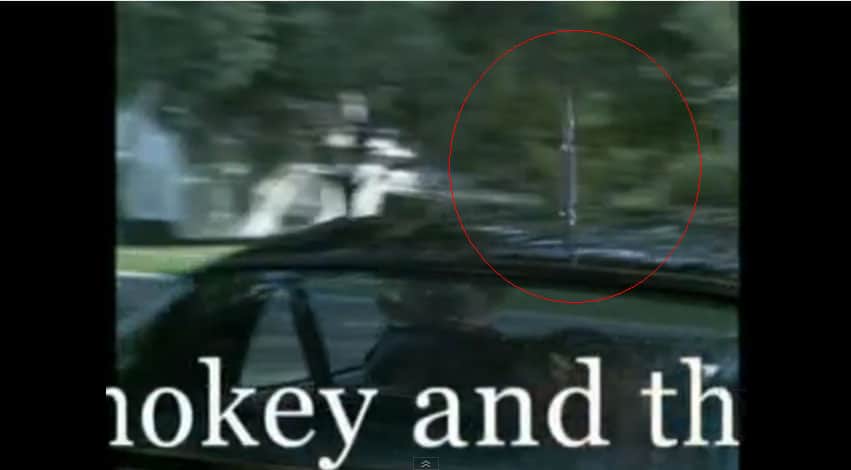 The Antenna Specialist AS MR 276 seems a close match to Bandit's antenna. It's the right shape, color and length. The antenna doesn't have to be installed on the trunk. The included lip mount can be removed, so the antenna can be installed on the car roof giving it the same profile as the Bandit's.

Next up is Bandit's scanner, which is a Pace model.

Smokey and the Bandit Scanner

In Bandit's race to evade Smokey, he depended on the Pace 10-4U Police Scanner mounted in front of his CB. It's a very basic scanner with four channels in the UHF 450-470 range that is designed for police, fire and EMS communications. Being a basic unit, it has no low/high or priority button nor is it programmable. Here are the scanner schematics for those who may want to build their own. There is no guarantee that the unit will work, however.

The Rise of CBs

As CBs became popular, the FCC lowered the cost of licenses trying for better compliance. Finally they dropped the license requirement altogether. That was a practical move, given that users were by large ignoring licensing. They were also ignoring their assigned call signs, opting instead to anoint themselves with colorful names a.k.a. "handles."

With the evolution of better equipment compounding the bandito culture surrounding CBs from Smokey and the Bandit, CBs have survived even the modern day proliferation of cellphones. Contractors and semi truck drivers in the construction and transportation industries are the ones who use CBs the most frequently now, as they need to operate within the short ranges CBs provide.

On a final happy note, lets end with a clip of Bandit using the CB microphone to call his trucker buddy, showing the free spirited interdependence that helps keep CB use alive today.